Auto-Porn Box project is a series of short and solo performances related to sexual issues.
Each «Auto-Porn Box» is a form of documentary and performative self-portrait that thus «focuses» on a
«performer» and offers insight into a unique sexual world and journey.

The Company has been developing a work based on gender and sexuality issues for several years. The project (Nou) (a piece for 5 performers created at the Montpellier Dance Festival 2014) drew strong personalities to the company : artists, ‘queer’ performers, sex workers, working positively around ‘sexuality’ and its depiction.
(Nou) is a group piece, an explicit, visual and artistic work, constructed in ‘landscapes’ around alternative fantasies of our bodies and sexualities that engaged us in a creative, conniving, profound and overwhelming process.

In parallel to this project and with this same team, the need to ‘focus’ on these unique and radical personalities who experience or work their sexuality beyond standard scenarios came to fruition.
The desire is to devise with each a short and personalised, autobiographical, poetic or documentary performance : a sort of self-portrait created from each individual fantasy, world or sexual journey.

Each dark, disturbing, poetic and/or descriptive ‘auto-porn box’ is unique in form, intention and appearance :
Each is written and devised for and with the performer concerned.
It comprises a series of six short solos (minimum 1min for1 spectator for the shortest, to 15min for 50 people for the longest), to be discovered consecutively by the audience.

In addition to the individual story, each ‘auto-porn box’ enables more general themes like sex work, ‘trans’ identities and alternative scenarios for sexuality to be evaluated :
The link between intimacy and shared past is of interest to us through self-portrait.

This ‘obscene’ (literally : what is usually off-stage, beyond the scope of the representation) work is based on personal lives to question our collective fantasies and challenge each of us, about sexuality’s place in our relationship with the world and more widely about the cultural composition of intimacy and norms.

Creation : 22nd and 23th may 2015 during the Festival Explicit in Humain Trop humain - National Dramatic Center of Montpellier 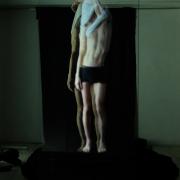 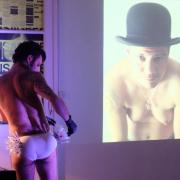 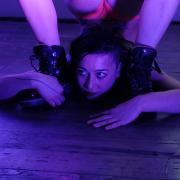