(pddp) is an underground, radical, and festive dance movement. Born in Buenos Aires, the post disaster dance has spread very quickly throughout the urban and underground culture.
(pddp) is presented as a party, an interactive and participative connection to the audience.

If you had to define what the post disaster dance is, you could possibly say something like : Born with this millennium in the circles of libertarian counter-culture and especially within the communities of Argentinian emigrants from the Queens, the post disaster dance has spread very quickly throughout the urban and underground culture.

This dance cannot be dissociated from a social criticism of the « after merchandise » and from the innovative and collective experiences that go with it, but above all it is an explo- sion of release and enjoyment: the perfect physical expression of the spirit of the times. Due to the influence of emigrant communities, the dance takes a lot from popular forms of dances like Argentinian « murga » and from contemporary evolutions of African dances; it keeps a strong notion of ritual and of particular forms of dances : alone, in couple or collective. Punk rock spirit and counter-culture are also obvious legacies.

As a non-competitive and non-performative dance, a dance of urgency, it is a frontal attack to notions of aesthetic and good taste that we consider too normative: thus, it has no fear of being absurd, or weak. It cultivates the gender ambiguity, just like a « queer » does, and claims values of solidarity and investment of the present in a society sometimes paralyzed by the promises other times by the fear of the future.

Its detractors consider it to be made of crazy and muddled gesticulations, but the dance rejects any physical codification and prefers a spontaneous and gladly excessive creativity : the only common point is a physical commitment that brings it sometimes closer to trance forms.

According to the philosopher Miguel Benasayag, the notion of « commitment » is fundamental in the post-disaster movement : as a reaction to the cult of the individual associated to merchandise and disaster, it is the key word for the dancers who are totally immersed in a sound and physical bath. Benasayag links the notion with an almost spiritual will to « melt » while developing a strong personal inventiveness. He defines it as a « dance of the link », which is to him the first artistic form of a change of paradigm. 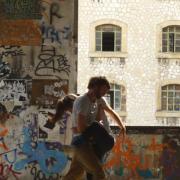 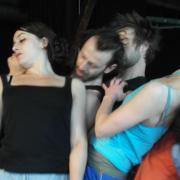 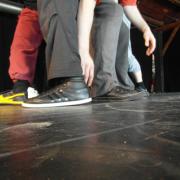